8 April - Day in History of India and Importance

1857 - Death of Mangal Pandey, the sepoy who revolted against British rule, in 1857 Indian war of independence.

The Times of India News item in paper dated 9 April : The Mutiny at Barrackpore: " At 2 o"clcok on Sunday last, a sepoy shot at Lt. Baugh The shot missed the man it was intended but struck his horse, severely wounding the animal. The sepoy then tried to shoot himself..."

7 April - Day in History of India and Importance

6 April - Day in History of India and Importance

1930 - Mahatma Gandhiji started satyagraha at Dandi after a long march, 'Salt Sathyagraha' by taking a handful of salt at 8.30 am.

1993 - Divya Bharati, a promising actress died due to fall from window of an apartment.

2015 - State of the art Scorpene submarine which has superior stealth and has precision guided weapons was undocked on 6 April 2015 by Defence Minister Manohar Parikkar at Mazagon Dock Limited.  MDL has to make five more of these submarines.

5 April - Day in History of India and Importance

1 April - Day in History of India and Importance

1878 - Calcutta Museum was opened for public. 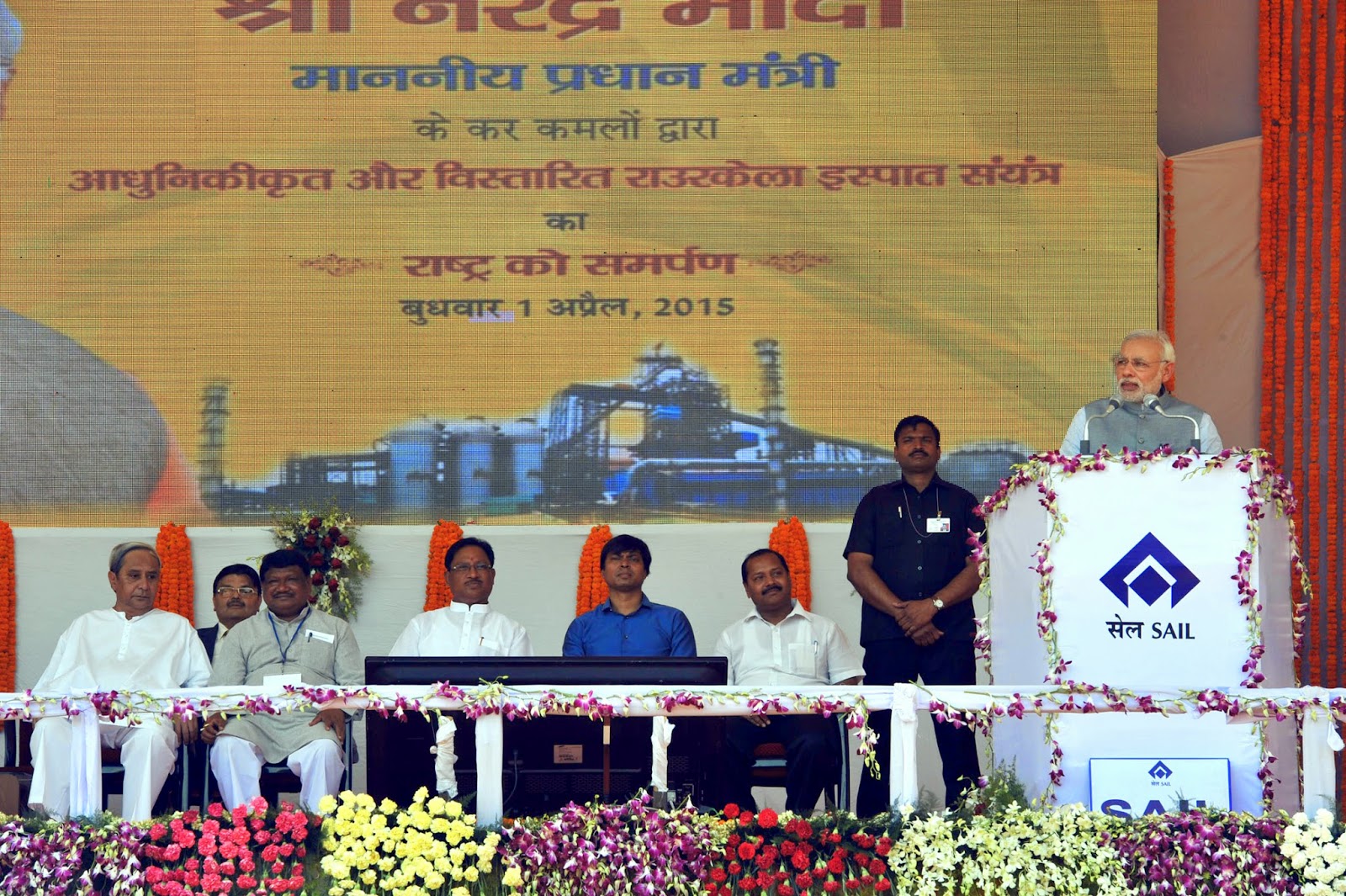 
The Prime Minister, Shri Narendra Modi addressing at the dedication ceremony of the Rourkela Steel Plant to the Nation, in Odisha on April 01, 2015. The Chief Minister of Odisha, Shri Naveen Patnaik, the Union Minister for Tribal Affairs, Shri Jual Oram and the Minister of State for Mines and Steel, Shri Vishnu Deo Sai are also seen. 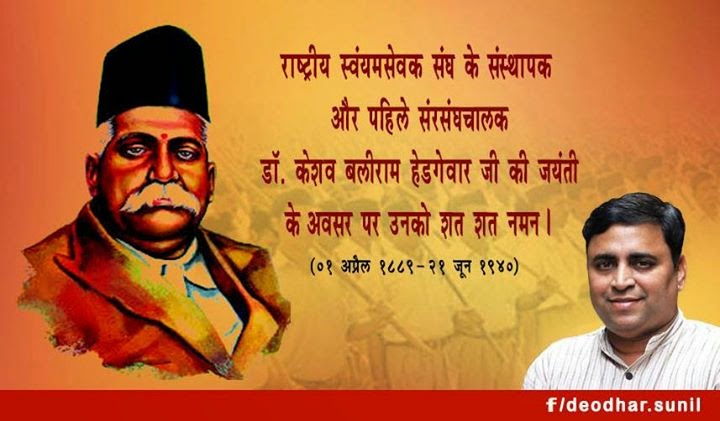 Dr. Keshav Baliram Hegdewar strongly believed that the Hindu Society, due to its internal caste, region and language differences as well as differences in the modes of worship; suffered untold losses and has been enslaved under foreign rule for over a millennium. In an attempt to substantiate and propagate his belief, he established the Rastriya Swayamsevak Sangh (RSS) in 1925 for the unity of the Hindus, and strived for its expansion.
http://samvada.org/2012/news/remembering-rss-founder-dr-kb-hedgewar-on-his-123th-birthday-on-yugadi/
http://www.hindujagruti.org/articles/35.html
http://en.wikipedia.org/wiki/K._B._Hedgewar
____________


On April 5, 1919, the first ship under a Swadeshi flag sailed from Bombay to London and  Indian merchant shipping was born in post British days. The Indian merchant marine industry has since grown phenomenally.


On this day in 1919, Steam Ship (SS) Loyalty, the first ship of the Scindia Steam Navigation Company Limited, journeyed to the United Kingdom from Bombay under a Swadeshi flag, heralding the entry of India into shipping. The National Maritime Day to commemorate the occasion was first celebrated in 1964 and since then, this has been an annual event for Indian mariners.


The credit for setting sail the first ship under an Indian flag - that of the Scindia company - goes to Walchand Hirachand Doshi an industrialist from Maharashtra. Over  60 years several Indian entrepreneurs tried to establish shipping companies but failed. As per details in an 'Old Account' by Gita Piramal, 102 Indian shipping companies registered between 1860 and 1925 went into liquidation making a voyage.

Walchand heard of the Maharaja of Scindia having put up the vessel SS Loyalty for sale. Walchand, inspected the ship, made a quick decision to buy the ship at the asking price of Rs 25 lakh and reached out to his Swadeshi friends Norattom Morarjee, Lallubhai Samaldas and Kilachand Devchand, and floated the idea to form a shipping company. The Scindia Steam Navigation Company was incorporated and listed on the Bombay Stock Exchange on March 27, 1919.

SS Loyalty  was launched in 1890 by Lady Louise Edgerton and christened as the RMS Empress of India. It became a part of the Canadian Pacific Railway Company and for 23 years it plied between North Pacific ports and the Far East. On December 20, 1914, it was reported that  the Empress of India had been sold and Maharaja of Gwalior had purchased the vessel and converted her into a hospital ship as his contribution to the war effort. In 1915, the Empress of India, a 5905 gross tonne, twin-funnel clipper bow ship was re-fitted to serve as a hospital ship for Indian troops and renamed, Loyalty.  In 1919, the ship accommodated 700 passengers and cargo. The ship was finally scrapped in 1923 for a price of just Rs 1.35 lakh.

Her first passage under an Indian flag was fully booked initially, but cancellations were heavy subsequently due to pressure from the British shippers on agents and passengers. Despite that the ship sailed. Amongst the passengers sailing on this maiden voyage were the Maharaja of Kapurthala along with his wife and the Maharaja of Kashmir. It made a safe successful passage to London. The Indian venture succeeded. The vessel was set to sail from London back to Mumbai after refitting. But  the British shipper forced all shipping agents not to book any carriage on this ship. So the ship sailed back to Bombay in ballast, empty, with heavy financial loss. But, Indian shipping industry was reborn.

The path started by the ship  led to the establishment of the Shipping Corporation of India. The significant companies created in Indian shipping were the India Great Eastern, and Jayanti shipping.y SCI.


Despite an early start, Indian Shipping has not progressed adequately.
Today shipping can draw a parallel with the IT industry in the country. The Indian IT software power and knowledge industry is recognised worldwide but it is heavily lagging in hardware. In the shipping industry's fate is much the same. The Indian trained manpower rules in all sectors of the shipping industry world-wide, but ships under the Indian flag are not many.  The Indian government and business should come together to grow Indian ships.


We can learn from China. Over the last decade, Chinese ships and manpower have developed hand-in hand in quantum leaps unmatched by any other country, backed by required infrastructure with government support. A second role model to follow is that of Norway, which at one stage to avoid losing tonnage under its national flag, opted to float a second registry under its flag in the form of NIS, giving special incentives for their entrepreneurs to keep vessels under the national flag. On similar lines India could offer special incentives and tax breaks to increase ships under the Indian flag by private sector participation.   If the government initiates now,  then a decade from now the pulsating effect of the dynamics of finance and shipping moving the economy will be felt.


Based on an article on 6 April 2012, by Capt K.S. Sujlana in Tribute India. The writer,  is with the merchant navy for the past 44 years and has been a captain since 1978

3 April - Day in History of India and Importance


1670 - Tanaji Malusure, died in the attack on Sinhgad Fort.